CitizensCampaign.org is a website representing Citizens Campaign for the Environment (CCE). CCE is working on Environmental issues, including the hazards of lawn and garden pesticides. I briefly spoke with one of their representatives Gerard Dolan tonight on my front porch. I was in the middle of a "My Name is Earl" episode (with Clint Howard as Crazy Rodney ;) and he was trying to get through the entire neighborhood, so we only were able to speak briefly. Gerry is not only an environmentalist, he is also an Iraq war veteran with a brand new baby boy (Congrats again, Gerry!) If you're in Syracuse and he or any of the CCE reps come to visit you, be sure to sign their petition to the County legislators for a requirement on Pesticide Neighbor Notification. There are also job opportunities at CCE. See the website for details. 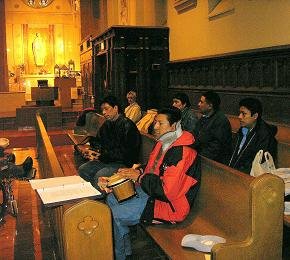 Dedicated to the Memory of Sister Karen Klimczak

Sister Karen Klimczak, along with Rev. Roy Herberger, founded Bissonette House, a halfway house for former inmates in the city of Buffalo, N.Y. to provide ex-convicts with opportunity for a new life. Bissonette House was named for a priest named Father A. Joseph Bissonette who'd been murdered at the site. It was a holistic approach to help transition the former inmates who'd had no family or home to go back to after their release from prison back into society. On this past Good Friday, a resident of the house who'd been involved with drugs and was attempting to steal a cell phone killed Sister Karen Klimczak in the same place where she'd tried to help them find jobs and better lives. In conversations that had taken place before she was killed, Sister Karen had maintained that if she were ever the victim of a violent death, she would be adamantly opposed to a death sentence for the perpetrator. If there is one clear message that Sister Karen would wish to ring out from her death, Rev. Herberger believes she would want it to be "forgiveness."

At the Cathedral of the Immaculate Conception in Syracuse, N.Y. last Tuesday, a cardboard sign in the shape of a white dove with blue trim graced the steps of the altar bearing the simple phrase: "I leave peaceprints." 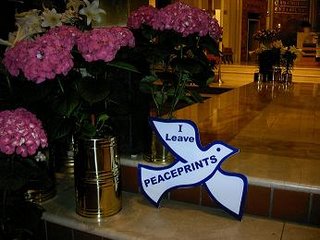 I was told that Sister Karen had created these cut-out signs to display on lawns in Buffalo and that it had been her belief that we leave behind our fingerprints on everything we do. She chose to leave the mark of peace wherever she went and she inspired and challenged others to do the same thing.

It was in that spirit on Tuesday that a Witness and Celebration mass was presided over by Bishop Thomas Costello of the Diocese of Syracuse and attended by mostly sisters who represented Region 2 Leadership Conference of Women Religious (LCWR) in New York State in support of the immigrant community and immigration reform that respects all people as human beings. A small group of migrant workers from Guatemala joined the sisters and Bishop Costello in the mass by providing witness, rhythm, and song. This was a group of people that the public had "met" last October when their meager temporary living quarters made of cinder blocks at a pumpkin and onion farm in the town of Schroeppel in Upstate New York had exploded as a result of a propane tank failure and one migrant worker was killed and nine workers were seriously injured. All that was left intact were the mattresses from the floor that they'd slept on and the cardboard boxes they'd lived out of while doing their seasonal work. They couldn't speak a word of English. They were afraid to give their names to the press. Until that place exploded, no one knew or cared much about who they were or why they were there.

A Journey of Hope 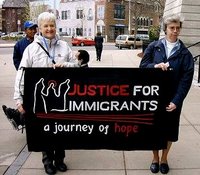 Before the mass, there was a rally held at a federal building in
Syracuse where the migrant workers had provided witness to what they had experienced while working the farm fields of America. The LCWR had expressed their preference for immigration reform that would take into account the fullness of the humanity of these migrant workers. Current immigration policies keep an estimated 11 million undocumented persons in the shadows, separate families and disrupt family life and cause undue hardship to those who are working hard. Largely in line with the particulars of the "Secure America Act", co-written by Senators Edward Kennedy of Massachusetts and John McCain of Arizona, a representative of the LCWR advised me that the organization supports the following for migrant workers in the United States:

- Worker Protections
- Reunification of Families
- A Path to Legalization

In the spirit of Sister Karen Klimczak's message of forgiveness and peace, the purpose of this event was to raise people’s awareness of the important issue of the plight of immigrants. The LCWR would like all of us to become more knowledgeable about the particulars of the legislation that is now before the U.S. Congress. As Sister Patricia Burkard of the Sisters of St. Francis in Syracuse has said, "Hopefully, the hearts of whoever hears our message would be moved to actively engage in advocacy for justice for immigrants and that our country will once again welcome the stranger and embrace those who come to this land in search of a better life."


A Message from Most Rev. Thomas Costello

Below I have written a brief summary of Bishop Thomas Costello's homily.

Migrant workers can be cursed, insulted, but they cannot be bid "good riddance". A new population of foreign-born workers in America is affording us more blessings than we can readily identify and while there are problems with immigration, most can be adjusted; some can be solved, but all must be endured. The immigration system we have now in this country is broken. Current laws undermine human dignity and family life. The immigration reform that has come out of the U.S. House of Representatives was flawed, and the reconsideration of the reform toward a more favorable bill for human rights has come from the Senate (*Kennedy-McCain). The Bishop said that the Catholic social teachings and experience as an "immigrant church" (with 71% of new parishioners being foreign-born) play a large part in shaping policy.

Bishop Costello reminded those present of the spiritual directives in the Bible that call upon the faithful to speak out about the issue of immigration. In Deuteronomy, the chosen ones were enslaved in Egypt and God (my comment: in a decidedly political act) God helped them to escape their enslavement. Deuteronomy 27:19 states, "Cursed is he who distorts the justice due an alien, orphan, and widow."
Exodus 12:49 says, "The same law applies to the native-born and to the alien living among you." Exodus 23:21 says, "Do not mistreat an alien or oppress him, for you were aliens in Egypt." The Bishop said that, from our spiritual heritage alone, we should know how alienation feels. Let alien, orphan, and widow find sustenance. Love them.

In the New Testament Gospel of Matthew, Jesus' teachings are clear. He calls upon us to "welcome the stranger." (Mt. 25:31-46) In the parable of the Good Samaritan, He blatantly tells us to embrace the stranger no matter how different he or she may be from us. St. Paul advocated hospitality to the stranger when he reminded us to entertain angels. Hebrew 13:2: "Be not forgetful to entertain strangers: for thereby some have entertained angels unawares." We are all one family of God.

In 1891 Pope Leo XIII recognized the right of all people to move freely from nation to nation. Prompted by the refuge crisis after WWII in 1952, Pope Pius XII committed us to caring for the pilgrim, alien, exile, and immigrant alike. (Encyclical Letter Exsul Familia). Pope John XXIII recognized that refugees cannot lose their human rights simply because they are deprived of citizenship of their own states. When there are just reasons in favor of it, he must be permitted to emigrate to other countries and to take up residence there. The fact that he is a citizen of a particular state does not deprive him of membership in the human family, nor the citizenship in that universal society, the common, world-wide fellowship of men. The human rights of every single person demand respect regardless of their legal status. (Pacem in Terris, 1963)

There are economic ramifications surrounding the politicization of immigration reform. There will always be poverty and greed in play. Fear is real since 9/11. When all is said and done, we see that U.S. popular opinion and governmental policy is unfriendly to "the stranger." The INS is probably the least "user-friendly" part of the governmental bureaucracy. There is a sense of apathy about the issue because it is so complicated and confusing. The Bishop assures us there are things we can do to support immigration reform that takes into consideration the dignity of every human being, regardless of their native land.

I have one more thing to share with you about the day. I was speaking to one of the Sisters before the mass and I said to her that I couldn't believe that our President was an inhumane person and I hoped he would become a stronger proponent of a moral resolution on immigration reform and lead our nation out of fear and distrust toward an understanding and just compromise on the issue. The Sister replied that perhaps this was President Bush's chance to get into Heaven, because up until now, he hasn't met up to the standards for entry into Gloryland on most of the other issues. ;)