This place is a disaster. I don't think I've seen one tree or bush that was not affected by the freak snowstorm that occurred on Friday the 13th [of October]!

The following photos were taken today at Mount Calvary Cemetary in the city of Buffalo.

The people of Buffalo need FEMA's help as soon as possible.

Douglas Turner of the Buffalo News has a suspicion that politics is playing a role in if and how fast disasters are declared and FEMA is activated by the Bush administration.

It took President Bush only two days to declare Hawaii a major disaster after Gov. Linda Lingle asked him to.

At the time of this writing, it's eight days since metropolitan Buffalo was devastated by a freak storm and Buffalo still was waiting for the prime declaration by the president.

Storm costs will reach three times the cited damage in Hawaii from an earthquake.

What happened in Richmond, Va., might be an object lesson. Six weeks ago, Richmond Mayor Douglas Wilder asked the Federal Emergency Management Agency for help after the Virginia capital was slammed by the tail of Tropical Storm Ernesto.

Wilder said parts of neighborhoods were wiped out. Wilder is still waiting for FEMA's help. 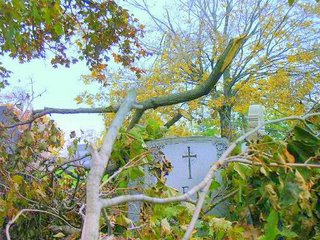 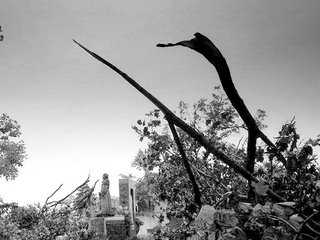 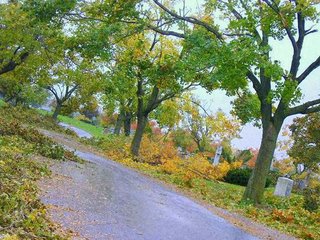 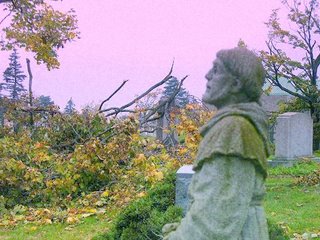 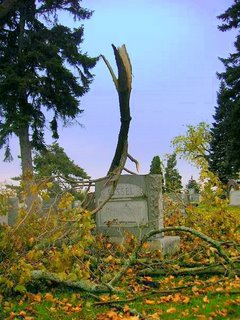 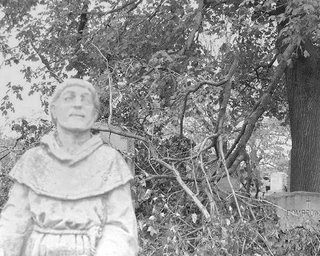 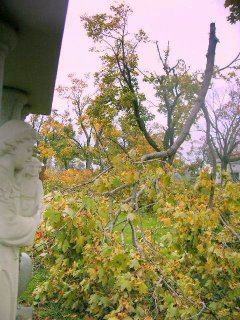 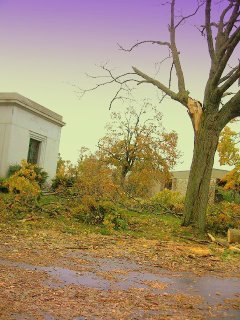 For this week's Tar Heel Tavern, I'll share a few of my photographic memories of a recent trip to your lovely state. 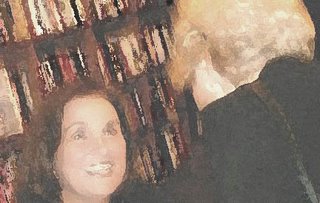 Elizabeth Edwards Greets a reader at a book signing in Charlotte 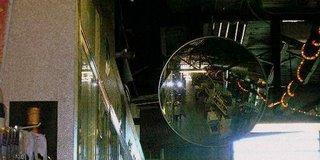 Senator Edwards and Me in Concord NC 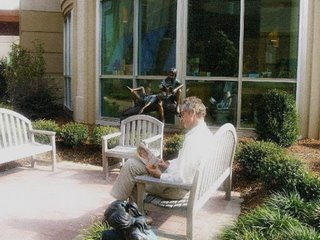 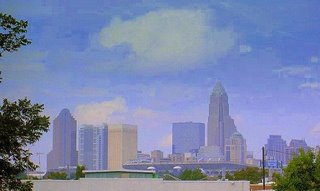 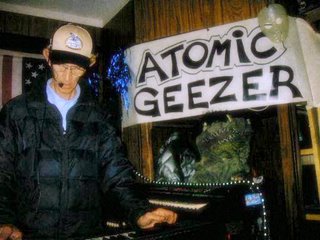 The Atomic Geezer performs for Iddybud 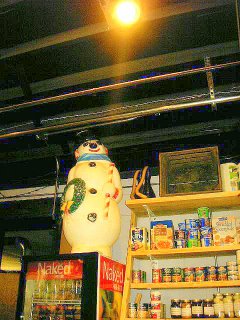 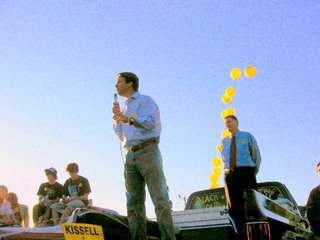 Posted by Jude Nagurney Camwell at 10:34 AM

Rabbi Arthur Waskow compellingly contrasts the New Testament story about Jesus' recommendation to render unto Caesar what is Caesar's with the Talmud passage regarding the creation of humankind by God in Genesis I: 27. Adding one simple yet revelatory line to the New Testament passage, a whole new light is cast upon the lesson to be learned. As every snowflake is unique, no two human beings are alike.

Gospels, Meet Talmud:
Whose Image on the Coin?

This Shabbat, as the Jewish community begins its yearly new spiral of reading the Torah, there arises a passage of the Creation story in Genesis that itself has given rise to both Jewish and Christian teaching (Gen I: 27): "God created humankind in his Image; in the Image of God did he create it; male and female did he create them."

The ancient rabbis explored the meaning of this passage. (Talmud Bavli Sanhedrin 38a; Soncino transl., p. 240):

"Our Rabbis taught: Adam, the first human being, was created as a single person to show forth the greatness of the Ruler Who is beyond all Rulers, the Blessed Holy One.

"For if a human ruler [like Caesar, the Roman Emperor] mints many coins from one mold, they all carry the same image, they all look the same.

Even among Jews, this passage is not terribly well-known; among other religious communities, hardly known at all. Yet it offers a profound connection with one of the best-known stories of the Christian Gospels -- one that has puzzled many Christians for centuries..

According to the story, Jesus' opponents among the Pharisees (many modern scholars think he was a radical Pharisee himself) came to trick Jesus into providing a pretext for his arrest.

One of them spoke up, saying:

"Rabbi, we know that what you speak and teach is sound; you pay deference to no one, but teach in all honesty the life-path that God requires.

"Give us your ruling on this: Are we or are we not permitted to pay taxes to the Roman Emperor?"

Jesus said to them, "Show me a silver coin."

When they dug one out for him, he asked them: "Whose image is on this coin, and whose inscription?"

What was the problem? The coin had Caesar's image on it, with the inscription "Divus" -- "God." To the Jews, treating an emperor as a God was idolatry. So just using the coin itself might constitute idolatry in Jewish law, and thus be forbidden. But by Roman law the taxes must be paid.

But Jesus had not quite answered. Instead, he had answered the question with a question (an old Jewish habit): "Whose image is on this coin, and whose inscription?"

The man who had challenged him answered, "Caesar's!"

And then Jesus responded: "So give to Caesar what is Caesar's, and to God what is God's."

This answer, say Matthew, Mark, and Luke, took his opponents by surprise, and they went away and left him alone.

But for two thousand years, Christians have argued over what this answer meant. What is Caesar's, and what is God's? Are there two different spheres of life, one ruled by Caesar and one by God? Should people submit to Caesar's authority in the "material" world, while adhering to God in the "spiritual" world? How do we discern the boundary?

Now let us place alongside this New Testament story, the Talmud passage we have already seen. Any learned Jew of the time – and Jesus was one -- would have known the teaching comparing God's Image upon Humankind to Caesar's image on the coinage

Now reread the Jesus story with a single line and gesture added:

"Whose image is on this coin?" asks Jesus.

Then Jesus puts his arm on the troublemaker's shoulder and asks, "And Whose Image is on this coin?"

Perhaps the troublemaker mutters an answer; perhaps he does not need to. Not till after this exchange does Jesus say, "Give to Caesar what is Caesar's and to God what is God's!"

Jesus has not just avoided the question and evaded the dilemma. He has not proposed dividing up the turf between the material and the spiritual. He has redefined the issue:

"Give your whole self to the One Who has imprinted Divinity upon you!" The coin of the realm will matter very little, if the troublemaker listens.

Why does the line I have inserted not appear in the three versions of the story that we have? Maybe it was censored out, to avoid collision with Roman authorities; or perhaps Jesus never needed to say the words, because his "Pharisee" questioners understood the point perfectly well

For me, reading the two passages together enriches them both. Read together, they fuse the spiritual and the political, instead of splitting the world into two domains. In this reading, the claim of the Divine Ruler to rule over an emperor includes the political realm. God can create infinite diversity and eternal renewal, and so is far richer than the imperial treasury -- which can create only uniformity and repetition.

But this is not just a philosophical or biological point. Because God rules over all rulers, because God calls forth from every human being a unique face of God, each human being must follow God -- not Caesar.

And together, the passages also teach us that God calls on us to create human cultures that are unique, diverse, precisely because they carry God's Infinite Image – rather than insisting that our cultures, like Caesar's image, be uniform.

Diverse and connected. Judaism and Christianity are unique, and should listen far more closely to each other's wisdoms.

How could we bring these teachings more deeply into our lives?

One liturgical possibility, and one in social action:

As Jews prepare to chant the Bar'chu, calling each other into a prayer community, and as Christians begin their prayer services, what if we were to pause to look from face to face around the communal circle, pausing at each face to say to our selves:

And what if we added the faces of people in New Orleans and Bangla Desh, in Tel Aviv and Gaza City, in Baghdad and Washington? And the green faces of God, in trees and grasses?

And when we examine the use of torture by governments we like or dislike, what if we asked: " If we torture the Image of God, do we make ourselves into images of Caesar?"

You can find dozens of such commentaries on the Shalom Center Website at Torah / Commentary/ Portion of the Week. If you find this or other Words of Torah / Bible / Wisdom useful, please think about making a (tax-deductible) gift to The Shalom Center. (Go to http://www.shalomctr.org and click on Donate Now.)