".....The theme of the video and what Nassiri claims is the whole motivation behind the music in general, is a message of a humane charity and peace-on-Earth. The music is what Nassiri refers to as "New Generational," a genre he coined. "It's a new type of music and I want to introduce it to the world," says Nassiri.
Abdullah asserts that "every dime" of the proceeds from the CD and DVD sales will go toward Children and Armed Conflict, the United Nations organization that rescues third world children forced to join military forces..."

Lyrics to the Song:

When I look into your eyes I see hope, and future
Realizing what we have inside.
Hearts of love, hearts of light, hearts of new beginnings
Eager to find the answers we are seeking

Let’s light a candle for the joining of our union
One for the fate of all mankind
One for love, one for thanks, all that we are given
Celebrating life and love we are finding. 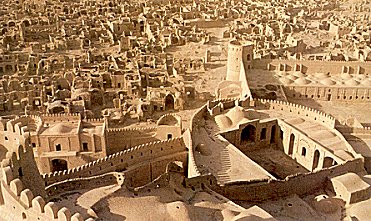 This was all that was left of the remains of the old city. Located on a 6 sq. km site and built in the 11th century, the Citadel of Bam’s unique mud-brick structure was the largest clay structure in the world. It seems it was destroyed in the quake.

In minutes, Bam's 2,000 years of history and its hopes for the future were left in ruins

"....According to this morning's news, the little town of Tappahannock, with a population somewhere under 2000 souls, may have been identified through intelligence intercepts as a possible terrorist target. Tappahannock is some 90 minutes down Route 17 from me, and it reportedly has a single policeman on duty at any given time. So my question is a simple one: Tappahannock? .."

A 14-year-old boy reveals more tongue-in-cheek wisdom than the pundits who cover up the truth for Misleader Bush on a daily basis.

YOU MUST SEE THIS CHRISTMAS CARTOON!

Pupils at King William's College on the Isle of Man have suffered this fiendish general knowledge quiz for 99 years. The average score is just two. Answers will be forthcoming in the new year .

It was the year of the Iraq war, royal embarrassments and rugby. What can you remember from 2003?

..The job was designed to provide cohesion and long-range planning for a White House foreign policy team under stress from breaking wars and ongoing crises. Blackwill has quickly become the alter ego to national security adviser Condoleezza Rice.
...Although a colorful and highly public figure in the past, Blackwill is now among the least accessible officials. In his heart, he tells colleagues, he's a 19th-century man who believes in the necessity of secrecy.

..the CIA believes that people in the administration continue to release classified information to damage the figures at the center of the controversy, former ambassador Joseph C. Wilson IV and his wife, Valerie Plame, who was exposed as a CIA officer by unidentified senior administration officials for a July 14 column by Robert D. Novak.

..a grand jury may be called to take testimony from administration officials

.."The only fear I've heard expressed is that the investigation will be too slow or too fast and will kick into a visible mode in a way that is poorly timed for the election," the Republican said. "If they prosecuted someone tomorrow, I don't think the White House would care. And they can do it in December 2004. They just don't want it to become an issue in the election."

Paul Krugman takes on the media and tells them to GET REAL:

"Don't fall for political histrionics. I couldn't believe how much ink was spilled after the Gore-Dean event over Joe Lieberman's hurt feelings. Folks, we're talking about war, peace and the future of U.S. democracy — not about who takes whom to the prom.
Political operatives have become experts at manufacturing the appearance of outrage. In the last few weeks the usual suspects have been trying to paint Howard Dean's obviously heartfelt comments about his brother's death in Laos as some sort of insult to the military. We owe it to our readers not to fall for these tricks.

It's not about you. We learn from The Washington Post that reporters covering Mr. Dean are surprised — and, it's implied, miffed — that "he never asks a single question about them." The mind reels..."

"The soul of the new machine," is how Mother Jones describes Grover Norquist in an in-depth profile.
"As national ward boss for the right," writes Michael Scherer, "Norquist has gone a long way toward demolishing the old Democratic agenda. And he isn't done yet."
For readers who don't know the 47-year-old president of Americans for Tax Reform, his invitation-only Wednesday meetings, for which he is the blunt master of ceremonies, "have become a hot ticket for Washington's conservative In Crowd, the place for GOP players to brain-storm, swap intelligence and see and be seen."
Even Karl Rove, the president's top political adviser, is known to drop by. As do senators and congressmen, from 259 of whom Mr. Norquist has secured written promises not to raise taxes. But his agenda doesn't stop there. He's launched Republican recruitment efforts to attract minorities, especially Muslims, aiming to turn them into ideal Americans.
"My ideal citizen is the self-employed, home-schooling, IRA-owning guy with a concealed-carry permit," he says. "Because that person doesn't need the [expletive] government for anything."
"And rather than negotiate with the teachers unions and the trial lawyers and the various leftist interest groups, we intend to break them," says Mr. Norquist, who at age 12 volunteered for Richard Nixon's campaign.

I'd hardly call answering an interview question "touting".
I'd call it "answering".
See how the media can be?

"...as you travel around the world, people are looking for a new leader. The world is so scared of George Bush. They don't know what he is going to do next."
Carter thinks it would only take "20 minutes" for Howard Dean to make an impact on this worldview and rebuild confidence in the United States again from other nations.
Carter feels that Dean's has a good chance to stand against President Bush in the upcoming presidential election because he is willing to reach out to groups who previously have not voted.


Who cares what these damn pundits wail on about? We've chosen our side....and the pundits will wind up victims of
losing the mainstream...scratching their head..see NATION article

"...Today, the nation remains no less divided than four years ago, with about 20 percent of the vote up for grabs. The punditocracy has chosen its side. Perhaps it's time the rest of us choose ours..."