From the pages of Daily Kos:
We Must Never Forget: February 5, 2003
by Al Rodgers

Colin Powell went to the UN and engaged in one the most infamous acts of Propaganda in World history.
We must never forget.

He fed the lie. He left his repuation slithering somewhere underneath that desk when he left the UN on that fateful day.

With Powell's resignation, at least we don't have to worry about the radical cleric Pat Robertson nuking Foggy Bottom.

*Update and Note: I originally titled this blogpost Kevin Sites Catches a Murder on Film. I felt this title was too judgemental, and thus changed it, along with adding some updates today. 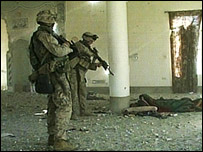 
I could hardly believe my eyes. I know war is horrific and soldiers do what they feel they have to do, but I don't think this soldier had to shoot a man through the head in cold blood for "faking death". I don't know what was going on in the soldier's mind, though, and I won't pretend to know. He didn't want to be in that place, on that day. How do I know that, you ask? Do an experiment: Ask any human being within earshot if THEY would have wanted to be there on that day. Ask them what THEY might have done. War is hell. Fu*king hell. Kevin must be haunted by these occurrences. So many of the journalists and troops must be haunted by the things they've seen and the things they've done - or had to do.

I've seen people who are complaining about Mr. Sites' reporting. I think these complaining people are being quite unfair and untrue to America by wishing to stifle reality. This is a democracy and we all are charged with a civic responsibility to choose our leaders. If we don't understand the truth, which comes in many small shapes, glimpses, and forms, then we'll always be a blind society and the quality of our democracy will be piss-poor and headed for death's door. If we're at war. its because our Representatives agreed to send us there. And we, the people, are the ones who are supposed to be taking a major role in guiding our Representatives.

My comments to the Sites blog:

"We need to show some repect for the journalist who was a mere witness. Don't put your frothing agendas onto him! The innocent community members in Fallujah are trapped between the soldiers and the insurgents. A humanitarian disaster is being created, which is no surprise. This is what happens in war.

There are no uniforms worn by the enemy to tell our soldiers who is out to kill them and who is pleading for their innocent life. Ask yourself or the person next to you: if you were in that soldier's shoes, what would you have done? None of us can say we know. If we think we do, we're fantasizing.

You are all naive to think anyone is going to be "civil" when there is a war and it's either you or them who shall die on any given day. This is what happens when we make a decision to put our troops in harm's way. War, when it's YOU participating in it, strips away all mythic pretense.

To the grunt, this isn't Gods and Generals or Geneva Convention Watch. It's getting back to your wife and kids. It's insuring your next breath.

Playing armchair judge and jury is pointless. Accusing Kevin Sites, the journalist who only shows you reality, of being a non-patriot is agenda-driven extortion and abhorrent to any of us who believe in true freedom. War is war, war's rotten. If you think for a minute any of those soldiers WANT to be there and play "hero", you're nuts. They want to do their duty and go home. They'll do anything to get there, and if you sit in judgement of them, you ought to take their place for a while.

If you're going to be angry about this shooting in Fallujah, think of the people (the neoCon-soaked administration) who SENT the soldiers to the hellhole on a false pretense to begin with.