I Stand in Solidarity With the Sago Miners' Families

I Stand in Solidarity With the Sago Miners' Families 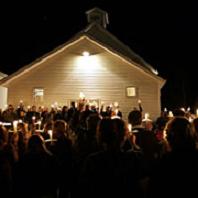 "Please do not leave any stone unturned. Twelve men, good family men, lost their lives, and we deserve answers to our questions."

Relatives of the Sago Mine victims, joined with the United Mine Workers of America, have called for more accountability from the federal agency that regulates thousands of U.S. mines.

There is a belief held by all of them that the coal mine owners are trying to blame the miners and they believe it's a horribly unfair thing to do... considering the lingering doubt about how the accident was said to have occurred, the failure of the safety equipment, and the length of time it took to rescue the miners. Lone survivor Randal McCloy has sent a heartfelt letter to the Sago families that said that three weeks before the blast, he and fellow miner Junior Toler (who died after leading a "Sinners' Prayer" with the other dying miners) found a pocket of methane gas. After reporting it to supervisors, they discovered it had been plugged with glue normally used to secure roof bolts and layers of rock. 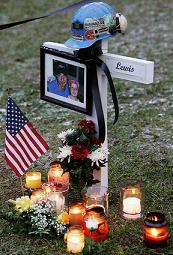 "Rest assured myself - as well as my family and these other families - will not allow you to leave a stone unturned or let the truth go unheard."

According to the New York Times [Apr 28],

Helen M. Winans, of Phillipi, W.Va., whose son Marshall died in the Sago Mine, the frustration remained raw. [..] "The mining company isn't totally to blame," Ms. Winans said. "The mine inspectors don't do a good job." [..] Ms. Winans said she was pessimistic about improvement in mine safety anytime soon. "You can pass all the laws you want to pass," she said, "but if you don't enforce them, they aren't worth the paper they're printed on."

"We assure you, Mr. Politicians, that we're not going to let this rest. We know in our hearts that this can be corrected. It needs to be done immediately, it needs to be done now. And it's on you. If another accident happens without safety changes, you are responsible."

- John Groves, whose brother Jerry Groves was among the Sago mine victims

The text of Randal McCloy's letter has been printed in the Guardian and the Washington Post. One sentence near the end of the letter particularly struck me. With a decidedly haunted tone, Randal McCloy wrote:

"I cannot explain why I was spared while the others perished."

I'm sure he's probably wondering if God had intentions for him to help save other miners from potential disaster. Although we all know that accidents are inevitable in the mining business, making sure this kind of thing does not so easily happen to other miners in the future might be his role in the Master plan. It seems that the families of the dead in West Virginia are speaking out for the safety of others in memory of the loved ones that were lost. I can personally relate to this way of thinking because my own Grandfather died as a result of too many years and too little worker protections in the coal mines. In spirit, I am with these families in their sadness and in their quest for the truth. 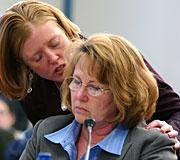 "This explosion, I believe, was preventable. And I don't call this an accident. I call this a disaster."

Citizen Bob Lawler of Vacaville, California wrote a beautiful letter to his local newspaper that spoke of Junior Toler leading his fellow miners in prayer as they peacefully surrendured all to their Lord. He believed they sat and prayed "not to argue with God or accuse Him, not to demand an explanation or strike a deal, but to surrender to Him." I believe that is true myself. There are times when every Christian must "let go and let God." Randal McCloy was willing to surrender, but God showed him that it was not his time to lay down life's burdens. I believe it's love, compassion and a sense of justice for his fellow community members that will drive Randal McCloy and the United Mine Workers of America to make the mining company accountable for the conditions in that mine and the quality and efficiency of the safety equipment that was being used. 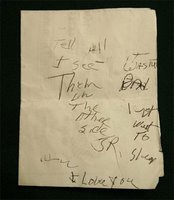 There have been 26 mining deaths this year, twice the pace of last year in a booming industry. The lone survivor's report told of the despairing men reciting a "sinner's prayer" and penning farewell notes. Do bureaucrats need to hear more before doing their jobs and protecting miners' lives?

- [From today's NY Times editorial]
No one knows which breath will be their last. And while we're here, we can care for our fellow man and woman - our friends and neighbors - enough to see them safe while working in their jobs so they can continue to provide for their families and make positive contributions to our communities. If that kind of "agape love" isn't aligned with our Christian faith, then what good are we? Restoring dignity and a rightful place for vulnerable people is a common theme in Jesus' ministry on Earth.

"Hate evil, love good; maintain justice in the courts … let justice roll on like a river, righteousness like a never failing stream"

*Family quotes were taken from this link.

Posted by Jude Nagurney Camwell at 1:53 AM

Credit: Sunhead Projects (You Tube)
Posted by Jude Nagurney Camwell at 1:50 AM

Susan's House by The Eels

Susan's House by The Eels
I've loved this song for a long time. Thought I'd share the video with you.


Posted by Jude Nagurney Camwell at 12:06 AM

Our Town by Iris DeMent

Our Town by Iris DeMent