Wesley Clark rightfully criticizes Brit Hume for Debate's GOP agenda
I didn't think Peter Jennings was much better with those 'waste-of-time' Bush deserter/Michael Moore questions.
Since when is Bush not an equal target for criticism in a free country? Does Peter Jennings consider Bush his King?
I thought Hume and Jennings looked like death-warmed-over last night. The bad lighting exposed the worst skin I've seen since the last Michael Jackson-trial clip on CNN. The warts on Hume's face would turn off a toad.


Posted by Jude Nagurney Camwell at 4:17 PM
David Kay (on WMDs):
"I don't think they existed"
Scott Ritter may have made a date with a 16-year-old, but hot damn, the man was right all along.

Posted by Jude Nagurney Camwell at 4:11 PM
BIN LADEN-
CAPTURED?
Why isn't it all over FOX News?

A spoof newsflash by a TV station in Lebanon saying that Osama Bin Laden had been captured in the northern city of Tripoli was taken more seriously than the programme-makers had expected.


Posted by Jude Nagurney Camwell at 1:23 PM
Maureen Dowd has lost it


-I appreciate the fact that The Tribune occasionally carries New York Times columnist Maureen Dowd. I usually enjoy her acerbic wit and her ability to hit the nail on the head.
-However, in "What's Up, Doc" (Jan. 18), she has gone too far in pillorying Dr. Judy Dean for her desire to "to stay focused on her own life, healing the sick." It seems to me, and I am a political animal, that Dr. Dean has her priorities straight. Her first obligation is to her patients.
-I am sure that if Howard Dean becomes the nominee of the Democratic Party, she will make the appropriate appearances, but not before finding another doctor to cover her patients for her. With the current shortages in our health care system, it is refreshing to find a doctor who puts her patients before her personal and family agenda.
-I don't think Laura Bush or any of the other candidates' wives Dowd mentions went through the rigorous training of medical school to put on a white coat and take the Hippocratic Oath. Dr. Judy Dean is putting first things first.

Food for thought: Ask yourselves why this "bold career-woman", Maureen Dowd, would put Taliban-like social pressure on a fellow career-woman to "chuck it all"..responsibility to patients, a professional career, and closeness to her son...in order to be turned into a pin-cushion by the likes of people exactly like Maureen Dowd? SHould Judy Dean cover her head with a burka, too?

Judy Dean, in Maureen Dowd's fantasies
Is Dowd promoting the "Stepford-wife" culture? Is this a woman we want representing us American women in the opinion columns of the N.Y. Times? Isn't she promoting more "Stand-by-your-man" than American freedom and progress for women?

Diane Sawyer didn't have a 21st century-attitude toward American women during her interview with Judy Dean last night on Primetime, either. She had a decidedly arrogant and hypocritical attitude toward a woman who would choose to maintain a sane lifestyle and responsible career while her husband was on the road.
(Where was Diane's husband, by the way? Why wasn't she with him? Why wasn't he with her?)

Why do so many women hate Diane Sawyer's hair, by the way? Don't you think she's been looking awfully dragged out lately? Do you think everything's okay with her on the homefront? What's making her look so haggard lately?

"Steinberg Dean is toothy; she doesn't seem to use much hair product; her face shows her age. It was both fun and horrifying to imagine her dismay at being set on by a team of eager ABC makeup artists, dying to go where only Noxzema has been before. It was also sad to watch her being forced to look at a photo -- the only photo? -- of Laura Bush in evening wear. Sawyer, who didn't even bother to disguise her doubts, wondered aloud how the doctor might feel about having to dress up or look pretty in public...But when Steinberg Dean opened her mouth to reassure Mrs. Mike Nichols, who was pretending to be confused about that crazy "feminist who uses her maiden name professionally and her married name personally" thing, "I'm Judy Dean," it was clear that Judy was going to be just fine......Journalists like me and Jodi Wilgoren and Maureen Dowd -- people who obviously like attention and are fascinated by power -- cannot fathom why a woman wouldn't be thrilled to be in the center of a political lightning storm. We try to cast her and re-cast her, chew on this mystery meat until we can name her. But that exercise apparently reveals more about us than it does about our subject... As Howard Dean said last night: Who would want to give up her life and career to join a campaign and "get poked at by everybody?" Maybe that sounds appealing to those of us who write about him, and who have forced his partner onto the examining table. But the Judy Dean we saw on TV plainly has more sense." 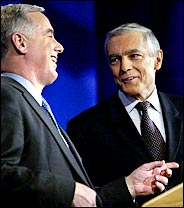