"I become irritated or disgusted only when anyone attempts to enlist these now voiceless dead for their own purposes. Respectful silence would be a far better response."


I respectfully and wholeheartedly disagree with Mr. Hitchens. Those deaths mean everything to our political reality and cannot be swept under the rug for any critic's values or personal satisfaction. Perhaps I can write a flowery poem for Mr. Hitchens and he will see my point.

Preventative detention: Tactics used to manage the NYC arrest process to keep arrested protesters away from judges and in police custody until President Bush spoke on the last night of the convention.

"Some of the people were seen on national television. There was a serious threat in Madison Square Garden..."

Michael C. Cardozo, speaking about 12 people who got onto the floor of Madison Square Garden during the RNC and disrupted a speech by a White House aide.


Yes, some of the people were seen committing serious offenses on the floor of the RNC. The most obvious threat to anyone's safety was this guy. He was liable for kicking a woman after she was pulled to the floor of the RNC. That, my dear readers, makes the Parlock clan's crocodile tears over a torn sign look "girlie-man" by comparison. I'll cry tomorrow...or as soon as the Gallup polls stop cheating.

Where Is The Outrage?

Dead Soldier's Mother Arrested
Where Is The Outrage? 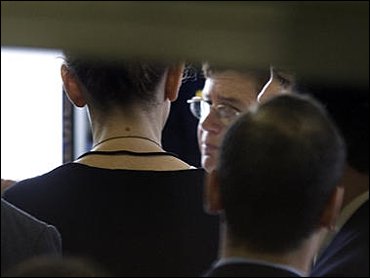 Police haul a grieving mother away

Posted by Jude Nagurney Camwell at 10:01 AM

Howard Dean's common sense is keen and he pulls no punches. His aggressive gumption and spirited bluntness (along with one scream) are what caused his presidential candidacy to burn and burn out, althought I submit to you that, as a Democratic candidate, he was far clearer on his Iraq stance than his then-opponent John Kerry.
He wrote an opinion piece this week on the failure to renew the automatic weapons ban, and I think he hit the nail directly on the head.

This week, Bush has benefitted politically by his silence as Tom Delay worked his voodoo to ensure that our American streets would become far less safe.

Some of my readers will tell me it's all about hunting the range where the deer and the antelope play. Perhaps we'll carry the first kid who dies from a wound produced by one of these legally-purchased guns to your doorstep for your inspection and you can have a chat with that kid's mother. Or the first cop who gets knocked off--why don't you have a chat with his widow about your home on the range?

The red states are running the show,
causing red, red blood to run
through streets of blue state cities
all for the love of a gun.

Home, home in the target's range
where the gangs and the terrorists play
where seldom is heard one common sense word
and Bush bows to the whims of Delay.

I would have more respect for President Bush if he had come out and said, "I changed my mind, and I'm not supporting the reauthorization of the assault-weapons ban."

But, he did not do that. America needs a president with the real courage to say what he believes -- no matter what the latest poll numbers show.