Look at me, Ma 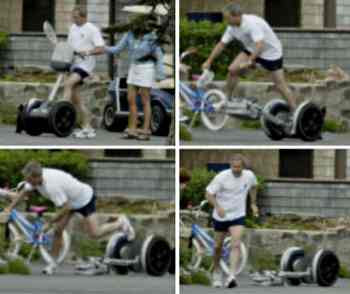 Saudi Arabia has been working hard

"Saudi Arabia has been and will continue to be a strong and reliable energy partner. We are working to bring prices down for George W. Bush's re-election consumers."

And caused a permanent stoppage in all bolts;

And buckled with a smile Mausers and Colts;

And rusted every bayonet with His tears.

And there were no more bombs, of ours or theirs,
Not even an old flint-lock, not even a pikel.
But God was vexed, and gave all power to Michael;
And when I woke he'd seen to our repairs.

It is safe to say that a majority of Americans would weep no bitter tears for any hard-core al Qaeda fighters left alone with several angry MI officers and a snarling dog, if such tactics would keep further 9/11 attacks from taking place. Such is the state of our morality in the 21st century, but for the moment, that is beside the point.

The point is four-fold:

a) The seven soldiers at the center of the Abu Ghraib scandal did not perpetrate these horrors on their own, but were ordered to do so. According to Sgt. Provance, those orders are now being covered up.

b) The torture took place because George W. Bush, Don Rumsfeld and John Ashcroft decided that Taliban and al Qaeda prisoners were not subject to the protections of the Geneva Conventions. The orders that created a torture-friendly environment came from the very, very top.

c) The strictures of the Geneva Conventions were deliberately removed because Bush administration officials feared war crimes prosecutions, as is clearly stated in the Gonzales memo.

d) The vast majority of Iraqis tortured in Abu Ghraib were not Taliban, were not al Qaeda, were not even 'insurgents.' They were civilians, among thousands swept up and jailed by American forces. However one may feel about terrorists being provided Geneva Convention protections, only a soulless fiend can devise a defense for the torture, rape, molestation and abuse absorbed by innocent people in Abu Ghraib.

Today as the news from Selma and Saigon
poisons the air like fallout,
I come again to see
the serene, great picture that I love.

Here space and time exist in light
the eye like the eye of faith believes.
The seen, the known
dissolve in iridescence, become
illusive flesh of light
that was not, was, forever is.

O light beheld as through refracting tears.
Here is the aura of that world
each of us has lost.
Here is the shadow of its joy.

Soldiers eat Iraqis, puke them back up, and make their parents eat their own vomited children

Soldiers eat Iraqis, puke them back up, and make their parents eat their own vomited children

There are those who evolve, and there are those who do not even believe in the existence of evolution. These people are free to continue acting like apes. But why dog the poor ape? Apes are among the innocent.

If only evolution were allowed, we might be able to rise above our barbarity. But nooo!

These parents are not likely to send their other children to battle the great America! Case dismissed!

But alas the case is not dismissed. It was a headbirth in the first place; a sick pipe dream; a weak attempt at imagining what the actual videos DO contain, since they are not willing to show them, and answer our speculation with the real thing.

Who knows? It may prove worse still! I cease to be amazed at the depths to which humans can sink when they are filled with fear, drugs and ego.

As a regular American with no political strivings, I want to apologize to the world for the behavior of a number of my bretheren and sisteren. I suspect that those "on the ground", "doing the dirty deed", are fearful and order-takers.
But they are acting cogs in someone higher's sick "vision", which is really a lack of vision. A simulacrum. A scheme. Sadly one that has killed and maimed and disinfranchised tens, if not hundreds, of thousands...all the while adding to their inheritance of wind. Hot wind boomerang.

Americans are the world. George is but a Texan. Too small for the job. Too ambitious. Unconcerned about future generations. Egoboy.

Surely John Kerry will be a better steward. Please have patience.

Doonesbury comic strip to list names of military victims killed in Iraq war
The comic will list chronologically the names of 702 soldiers killed through April 23, said Lee Salem, editor of the Kansas City-based Universal Press Syndicate, which distributes the strip. The names were set in 6-point type to fit in the six panels of the May 30 strip. "The intent (of the strip) is to recognize those who died," Salem said.
[LINK]