323 Dead-America's Future is Tied to Russia's 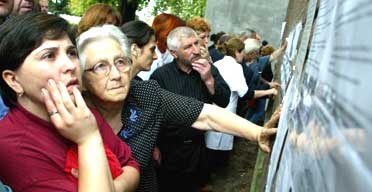 Ossetians search for loved ones on a hostage list at Beslan's hospital. Photograph: Alexander Zemlianichenko/AP


323 dead in Russia.
This story is almost impossible for me to wrap my mind around. The culmination of collective sorrow is almost too much to bear.
Couldn't there have been another way to deal with the situation? (This isn't a criticism, it's just a question).
If you ask me, the Russian authorities let the terrorists win.
You don't think the terrorists went into that school building expecting to come out alive, did you?
Every death they could chalk up was to their advantage.

You may say terror in Russia is not our problem. It's internal political strife.
To that, I would say to you: Why are we in Iraq? Why are we in Afghanistan?
I'll tell you why.
American liberty.
The governments of Iraq and Afghanistan could not handle the terror that was killing off our business interests.

You may say that Russia doesn't require or desire our assistance.
To that, I'd tell you that we will need to be able to do some convincing. We will need to seek their cooperation as the U.S. moves further and further into the Caucasus region with our international business interests. Progress marches on. We are citizens of the globe no matter how the Bush administration cares to step around the subject. We must act as citizens.
It won't be long before the Chechen problem becomes our problem, too.
Remember, the Chechen terror is only one airplane ticket away from America.

I keep wondering--what if we'd already banded with the Russians in a genuinely international war on terror? Would the outcome have been different? Would there have been more international pressure put on Putin to settle the Chechnyan crisis? Would these children still be alive? Would we already have had a system of international support devised to handle situations like this?

Would the world be a different place today if we'd had a leader who was capable of embracing the entirety of the world (as Jimmy Carter, Bill Clinton, Bush 41, and Ronald Reagan showed they were capable)?

The stakes are high in the war against terror.
When it comes to a president's strategy, this should be all about the United States. I don't argue with Bush there, but he's totally missed the boat in denying the world, through his ignorance, sheer greed, and disingenuousness, a willing invitation to fully cooperate.

Russia still doesn't trust us as far as they can throw us.
The feeling is obviously mutual if you examine Bush's actions these past few years (and not his false words).
We can either proceed with our unilateral war on terror and push US/Russian relations toward a new cold war or we can start offering some genuine diplomacy.

Our leader's rigid ethnocentricity when it comes to diplomacy has caused us to turn many a blind eye.

It wasn't an American elementary school the terrorists chose to enter this time.

What if it happened here? Do you see it as being out of the realm of possibility? If you do, God help you.

God help the souls that were lost.

I'd like America to be seen as a people of the world; for the world.
If we are a truly moral people, it should be so.

Every one of our actions should be geared for the strength of America in pure harmony with a caring for liberty and justice for all throughout our world.

Ask yourself who will lead us to the strongest and truly safer America when you vote on November 2.
Is it the man who cuts down and mocks international alliances or the man who promises to restore and strengthen them?

The intent of Campaign Truth is to provide a portal where bloggers and other interested folk can gather links to information which sheds light on where the candidates stand on issues in the 2004 Presidential Campaign. By harnessing the collaborative power of bloggers that has been proven by sites such as The Command Post and by the influence of the blogosphere itself, Campaign Truth will provide a place where voters can come to get past the story-of-the-moment in the media, and dig deep into candidates' true positions on the issues that matter to them most.

There are pages set up for:

I'll be participating and I hope you will, too.
Posted by Jude Nagurney Camwell at 1:13 PM
Newer Posts Older Posts Home
Subscribe to: Posts (Atom)