Memorial Day-
This Was Spanky


Remember Who We Are Losing 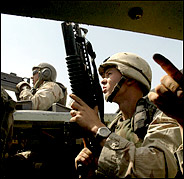 It's guys like Spanky that we'll be remembering this Memorial Day weekend.

Army Spc. Philip Ian Spakosky, known as Spanky to family and friends, was killed on May 14th while defending the Mukhaiyam Mosque in downtown Karbala, Iraq.

Those who knew him have said there was nothing he wouldn't do for his leaders. He was an outstanding Soldier, very humorous and to-the-point, and full of life.

At his funeral, his Grandmother Good said, "When he joined the Army and was first sent over to Iraq, he was all for the war. He believed in the mission. But lately, when he would call or write, his tone was different. You could hear the doubt about the situation in his voice. He seemed to change his mind about being over there. He knew it wasn't safe, and he was worried."

Spanky's brother-in-arms Sgt. Michael Cannon said, "He didn't understand why we were here. But there was nothing he could do to change it, so he tried to make it positive for everyone."

His bereaved mother Lisa Good has stated, "The politicians have to resolve this conflict and bring everyone home alive. No more caskets for any family to bear."

His best Army-friend lamented that they'd 'been over there for a year', then they were 'sent to a place like' downtown Karbala.

The day before he died, Spanky spoke by satellite phone with his wife, Keisha, who was in Germany. They'd just observed their second wedding anniversary four days earlier, but he was afraid she was calling to say she was leaving him, Sergeant Cannon said. Instead, she told him she had gotten a tattoo over her heart with his name on it.

Spanky's younger brother, Jeff, is serving in Iraq with the Marine Corps, and family members have asked that he be reassigned to non-combat duty. It's not known when or if a decision will be made on the request.

I'll be performing with a choral group this Memorial Day singing songs of America. When I sing the words "Here rests in honored glory; an American soldier known but to God" and "Greater love hath no man than this; that a man lay down his life for his friends", I'll be especially thinking of Spc Spakosky and all the Americans who laid down their lives while courageously doing their duty, even when they had private doubts.

I'm here to publically express those doubts and relay their human fears. I do it not for myself, but for men and women just like Army Spc. Philip I. Spakosky.

Posted by Jude Nagurney Camwell at 11:35 AM

Well, no, but some Iraqis believe it.

Play "Which Dictator Are YOU?"