What some reported as a tepid reception to his patter was actually "very respectful silence,"Colbert joked on his show last night.

"When telling a president the truth offends the White House press corps, we are is serious trouble."

The New York Times' article Monday on the White House correspondent's dinner failed to include any mention of Stephen Colbert, the deadpan host of Comedy Central's Colbert report, RAW STORY has found. In fact, the paper didn't mention the comic's appearance at the dinner at all. 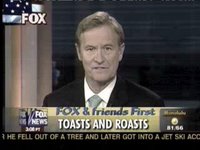 On Sunday, Senator Edwards was keynote speaker at the first Brussels Forum . The theme was "Trans-Atlantic Challenges in a Global Era." He spoke to political, business and opinion leaders from Europe and North America about the international community's need for new tools to fight nuclear proliferation along with finding cooperative ways to help end conflicts and create stability. Speaking strongly about a common effort needed to control proliferation, with the United States and Europe taking the lead, Senator Edwards brought to my mind a a speech given by President Franklin Delano Roosevelt in 1937 when many American citizens, believing in isolationism, held tightly to the Neutrality Act that was on the law books at the time. (Designed to ensure that, after WWI, the U.S. would not become entangled again in foreign conflicts.)

President Roosevelt was a prescient leader. Back in 1937, he knew the dangers we would someday face. He also understood the precious value of the rule of law. Read the following portion of his speech and think about where America stands on the issues today:

To paraphrase a recent author, "perhaps we foresee a time when men, exultant in the technique of homicide, will rage so hotly over the world that every precious thing will be in danger, every book, every picture, every harmony, every treasure garnered through two millenniums, the small, the delicate, the defenseless - all will be lost or wrecked or utterly destroyed."

If those things come to pass in other parts of the world, let no one imagine that America will escape, that America may expect mercy, that this Western hemisphere will not be attacked and that it will continue tranquilly and peacefully to carry on the ethics and the arts of civilization.

No, if those days come, "there will be no safety by arms, no help from authority, no answer in science. The storm will rage until every flower of culture is trampled and all human beings are leveled in a vast chaos." If those days are not to come to pass - if we are to have a world in which we can breathe freely and live in amity without fear - then the peace-loving nations must make a concerted effort to uphold laws and principles on which alone peace can rest secure.

The peace-loving nations must make a concerted effort in opposition to those violations of treaties and those ignorings of human instincts which today are creating a state of international anarchy and instability from which there is no escape through mere isolation or neutrality.

Those who cherish their freedom and recognize and respect the equal right of their neighbors to be free and live in peace, must work together for the triumph of law and moral principles in order that peace, justice, and confidence may prevail throughout the world. There must be a return to a belief in the pledged word, in the value of a signed treaty. There must be recognition of the fact that national morality is as vital as private morality.

If America doesn't lead, who will?

If we look at the world being led by the Bush administration today, we see a 21st-Century turning of the tables on the word "isolation". Neo-isolationism is not a viable political alternative, especially when we are presented with the completely false choice of "Which will it be - isolationism or preemptive war?" It seems that our nation's current state of isolation is not of its own accord. Because of the absence of American leadership in international cooperative efforts, our nation is being isolated by the international community.

America was isolated while the world moved on the climate treaty. (Before weaker partnerships and environmental protections were formed by the July 2005 Asia-Pacific Partnership for Clean Development and Climate). America has become isolated on the issues of international women's health and on the ICC. America is being isolated from some of its closest allies as the EU backs a proposal for new UN Human Rights Council. Most unfortunate for America, she has become isolated from her allies because of the unilateralism of the Bush administration. We cannot remain an isolated country if we believe in a just world where nations can come together in common purpose to meet great challenges and to accomplish great things for future generations for every person on the planet.

Since our nation's involvement in WWII, we have become aware of the real dangers to national security that we face overseas. We no longer believe that we can make only unilateral decisions and expect that peace will thrive around the world as a result of those unilateral choices. Our economic interests are tied to the international community. Cooperation through international organizations, the exercising of diplomacy, the promotion of free trade, and treaty-making (along with treaty-keeping) are all necessary in order to make peaceful progress and to increase freedom and democracy for the benefit of the American people and all the world's people.

The Bush doctrine of pre-emptive war has caused our nation to be set on a new and dangerous path of unilateralism that has caused us to become isolated from the rest of the international community in ways that the people who've been responsible for shaping U.S. foreign policy within the Bush administration may have never foreseen. They have rejected multilateralism, shunned foreign alliances, international institutions, treaties, and other international agreements. Military power alone was threatened when diplomacy was sorely required. We now know that unnecessary war was waged. America's reputation in the world has been tarnished and there are few nations who currently wish to emulate our brand of foreign policy. We need to get back to the roots of our nation's core founding values and to return from the dangerous precipice of unilateralism and pre-emptive war to international cooperation and respect for the rule of law.

There have been fears that the NPT (Nuclear Proliferation Treaty) would be literally destroyed because President Bush declared that he'd work with India to change both US and international law to permit trade in US civilian nuclear technology with India while, at the same time, he is attempting to deny Iran (an NPT signatory) civilian nuclear technology. In his speech to the Brussels Forum, Senator Edwards suggests that instead of accepting the inherent weaknesses of the global non-proliferation regime, it can be looked at as an opportunity for the international community to fix what is broken. He told the Forum attendees that he believes a new global nuclear compact should be created to reinforce the NPT and close the loophole that allows civilian nuclear programs to go military. He wants the U.S. and Europe to take the lead to promote a global ban on the production of material for nuclear weapons and to establish global standards to safeguard the material so that nuclear weapons never reach the hands of terrorists.

President Roosevelt said there could be no stability or peace either within nations or between nations except under laws and moral standards adhered to by all. In his 1937 speech he said:

"International anarchy destroys every foundation for peace. It jeopardizes either the immediate or the future security of every nation, large or small. It is, therefore, a matter of vital interest and concern to the people of the United States that the sanctity of international treaties and the maintenance of international morality be restored."

Today, more than ever, Senator Edwards understands that America should be engaged and work with others to help solve this world's many problems. As he said on Sunday, "spreading democracy is not about knocking regimes down; it's about building democratic institutions and communities that will protect basic freedoms." We need to achieve those goals together.