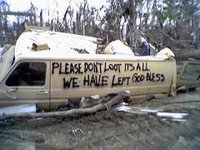 Katrina will surely be a milestone of the first order for the Gulf Coast and for millions who were directly affected. But will it reverberate beyond? In the fall, some predicted that the scenes of horror from New Orleans would spawn a reconsideration of race relations and a new era of concern for the nation's underclass. If that's happening somewhere, it's not apparent in Washington. An initial surge of sympathy has ebbed, and the victims are finding out the degree to which they're on their own.

Katrina was also set forth as a potential turning point for the Bush presidency, the moment at which his re-election momentum disappeared and disappointment overtook his second term. But by year's end, Mr. Bush was battling back in the polls and showing signs of resilience on the issues. Looking forward, Katrina's historical and political legacy is uncertain.

There is no doubt that the American public's collective jaw dropped after seeing the quality of FEMA's Hurricane Katrina response. The shocking realization that New Orleans was worse off than many third-world places hit by natural disasters caused 'Heckuva-job Brownie' to be replaced by a far more efficient and capable Coast Guard Vice Admiral Thad Allen. American citizens proved that they were a compassionate and generous people by sending billions of dollars in charitable contributions to the victims of the hurricane. Over this Holiday season, 38,000 families remained in hotels rooms nationwide - waiting to return to what once was home - and facing an uncertain future. The Bush administration still has a long way to go to fulfill the promises they have made to restore the city of New Orleans - and to retain the character of the city rather than gentrifying it or making it just another opportunity for corporate-cronyism. Beyond the chatter about the rebuilding efforts lies the reality of Two Americas. Some things in New Orleans may change, but for the millions of Americans who are among those living below the poverty line and the working poor, nothing will change unless we remember their human faces.

It seems that it's harder to motivate ordinary citizens to respond to a disaster that is as entrenched - albeit invisible - as poverty. It is a condition that clearly existed in New Orleans before Katrina blew the curtain away to reveal poverty's human face. In the case of New Orleans, the majority of those faces were those of African Americans, but poverty is not racially exclusive or selective. Poverty exists in urban America and rural America and in every corner of each American community. One thing that cannot be denied, however, is the fact that we met the face of poverty in New Orleans last September.

Will Americans remember that, just as important as rebuilding the Twin Span bridge from New Orleans to Slidell, Louisiana, that we need to do the hard work of building real and lasting bridges out of poverty? See my post titled "The Helping Hand":

Bishop Jakes spoke about the Twin Span Bridge that connects Slidell, Louisiana to New Orleans which was partially submerged by Katrina and will need rebuilding. He called it a symbol of our need to rebuild bridges between our ideas, our perspectives, and our differences - we must build unity. "We can't multiply by dividing and we can't add by subtracting," said Bishop Jakes. If we rebuild that bridge with unity, it could make a real difference, letting go of the divisive illusion that we're black or white; Democrat or Republican; "right" or left." The true vision, he said is "One nation, under God, indivisible, with liberty and justice for all."


Will the realities of Katrina continue to reverberate beyond the Mississippi Gulf Coast?

On Spiritual Equipment and Flabby Pieties

On Spiritual Equipment
and Flabby Pieties

Playing on what I see as the incredibly divisive nature of Christianity in today's American public square, Robert Ferrigno has written a novel that uses as its premise a post-terror scenario where blue states have converted to Islam and red states have broken away from a new American Islamic Republic, forming a Christian republic in the South.

In a recent post about an overview of his book, titled Prayers for the Assasin, I particularly appreciated Mr. Ferrigno's characterization of "flabby piety" in today's American public square. We are at war with those who fight with a viciously-held fundamentalist religious ideology. Call it brainwashing, call it instilling a nature of the violent duty "for God.." - call it what you will - it seems to be quite effective. It seems that the hard Islamic right fundamentalists are not easily won over by the promise of Western democracy, with its promises of shopping malls or hamburgers, boob jobs, and abortions on demand.

How will we pay, as a united nation, for the privatization, the watering-down and the flattening of the mysticism of Christianity - an assasination in itself, perpetrated for decades by the Christian Right - to a few narrow issues? While Democrats fail to convincingly articulate the faith that has shaped their individual value systems and world views, the voice of the Christian Right dominates and thus defines the American media discussion of values.

"..ask yourself what kind of leader would you trust to lead you through dark and perilous times?"

Is more piety - genuine piety - the answer to countering - and winning - a one-sided Holy War?

Christian piety and politically religious "muscular" piety (born of American national theology not resembling the faith itself) seems to be a perfect vehicle for hypocrisy, when the two considerations are placed side-by-side. The nation is divided on our approach to this war because it is unilaterally a Holy War, with American leaders dabbling in religious self-helpisms that you'd find in mini-books you'd buy at Eckerds or Wal Mart. For an example, consider Bush quoting Longfellow's plea for "Peace on earth - good will to men" in his recent speech about his plan to kick insurgent Islam's ass.

How morally effective is the answer we are currently providing - to kill them (and collaterally kill their children and facilitate their martyrdom) if they don't "comform?"

What about all the people who are not Christian - and those who do not believe in God at all? History has mocked and silenced these people. Wasn't American democracy supposed to give them a voice? What will change in the future for those who demand a government free from religion? Why are our elected Representatives so quick to ignore or respect the libertarian-leaning citizens who want as little religion in government as possible? (We already know why - it won't get them re-elected - a great reason for supporting strict term-limits.)

I'm glad Mr. Ferrigno wrote this book at this time. We need to intelligently discuss, without the fear and exasperation of being labeled as anti-American; anti-religion; - anti-anything - the evil genius behind politicians using (and abusing) our religious values to carry on their anti-faith, violent, bloody, elective, unnecessary, and unjust wars.

Here is the Robert Ferrigno quote that inspired the title of my blogspost:

We live in an innovative, sectarian nation, which values personal freedom and creativity, but it also leaves us shortsighted and vulnerable, demanding quick fixes and steady progress. In a generation-long war, technology will not matter as much as the absolute belief in the rightness of one’s cause and the willingness to die for those beliefs. The ongoing and deadly hostility between the Sunni and the Shiite branches of Islam stems from the martyrdom of Imam Hussein, the grandson of the prophet Muhammad, in a battle over 1300 years ago. Can you remember who won the World Series two years ago? Which culture do you think is better equipped spiritually to fight a fifty-year war?

"Moral ambiguity and cultural relativism are luxuries when the ground shakes beneath your feet."

In contrast to the moral certainty of Islam, we have the flabby pieties of our own leaders. George Bush talked about angels watching over the U.S. after 9-11, and then suggested that we all go shopping, lest the terrorists win. John Kerry’s Catholicism was high on his resume when he ran for president, but he was unapologetic about his thirty-year record of voting against any limits on abortion, in clear violation of the most basic tenets of his Catholic faith. Now try to imagine an Islamic politician stumping with a ham sandwich in his hand, or suggesting that shopping is the best defense, and ask yourself what kind of leader would you trust to lead you through dark and perilous times?

Moral ambiguity and cultural relativism are luxuries when the ground shakes beneath your feet.

- Robert Ferrigno, former reporter and author of a new novel, Prayers for the Assasin

I think that this new book will have no trouble finding a wide audience. I look forward to reading it.

Please join me in reading and signing this new petition - Preamble to Impeachment by Syracuse, NY citizen Robert Schad.

I have lost faith that the majority Republican power in the House and Senate would ever grant us any respect regarding our concerns, especially when we've heard the constant escapist defense "But we're at war.." to eliminate all democratic accountability - a mockery of us when you consider that the very war for which we demand accountability is the one they use as their defense.

The Republicans' credibility is all but gone for all of their partisan clinging to a (mis)leader who lost the trust of dutiful, concerned, thinking citizens long ago. They need to understand that clear fact. They ignore citizens' pleading for openness and truth to the nation's detriment.