Officially Credentialed, then disinvited:
*due to unforeseen lack of space at Fleet Center


Others Who Will Be Blogging from the Convention:


• Hyperlincoln is dedicated to the best in blogging at the 2004 Democratic Convention. David Beckwith (Anonymoses) and I will be keeping you abreast of the best of the Convention blogging information as it comes in.

• Photoblogging Election 2004 was launched to make it easier for convention bloggers to do some of the things that professional journalists' companies do for them: index and archive images and retrieve them quickly for publication. They say they have prepared links to every DNC Convention blogger they know of.

• Technorati has a new website dedicated to covering the bloggers in real-time at the Democratic Convention and the news they will generate. Titled "BlogWatch", it will include CNN.com’s up-to-the-moment review of numerous Web logs covering the convention marks a first for convention coverage using Technorati, the leading monitor of blogs. CNN offers its own convention blog on CNN.com with updates from Candy Crowley on the platform and from CNN anchors, analysts and correspondents, including James Carville and Tucker Carlson, both of Crossfire.
Technorati has a politics-devoted news aggregator for up-to-the-minute blog news.

• There is an open Yahoo Group set up for anyone interested in talking about the convention.

• Speaking of convention....Jon Stewart, whose Daily Show will cover the convention in their own (shall we say 'unique and delightful') way, speaks of Conventional wisdom in a conventionally wise way here. And there's nothing funnier than Ed Helms' timid-while-in-your-face challenges of "You're a jerk!" or "Labia! Urethra! Penis, penis, penis... vagina?" to a Boston cop from the "designated free speech zone" in Boston! I keep playing and replaying the (linked) video (titled "Freedom of Opression") and rolling with laughter.

And as they work beneath the clay,
With heads bowed down these miners pray,
That God will hear them up above
And send them safely to the ones they love. 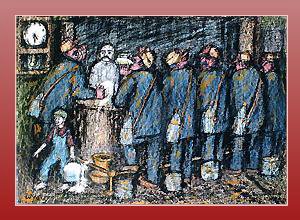 Now if this cannot come to pass,
And he must pay the price at last.
The miner leaves his last demand
Keep my child safe above the land.

--from A Coal Miner's Prayer by John & Millie Quann

31 miners have lost their precious lives in an accident in the coal mines of Ukraine. I am asking my readers to pause and say a prayer or offer a meditation for these lost souls. My own grandfather, a son of Ukrainian immigrants, spent too many of his youthful days toiling in the coal mines in the mountains of Pennsylvania until he could find a better opportunity. If it isn't a terrible accident, it's Black Lung disease that takes the miner from his family. Black Lung took my grandfather from us long after his days in the mines were over. If the miner survives the years unscathed, he's one of the luckiest. He's probably the least "looked-after" worker in the world..even here in America. 100 miners have died in mining accidents in Ukraine alone this year.
Posted by Jude Nagurney Camwell at 2:01 PM

Hear it.
Read it.
Do both at the same time for the best effect.
Whatever you do, don't miss it.

"I’m not saying it’s there yet. It’s not there yet. But that’s where it has to go. We have to stop looking at it as some sort of academic debate about Geneva Conventions. What happened are war crimes."

"...you have a bunch of people who've been for 10, 12 years have been fantasizing since the 1991 Gulf War on the way to resolve problems. And of course Israel will be a beneficiary and etc. etc., but the world in their eyes — this was Utopia. And so they got together, this small group of cultists, and how did they do it? They did do it. They’ve taken the government over. And what’s amazing to me, and what really is troubling, is how fragile our democracy is. Look what happened to us.

[In the press, there is] self-censorship, which is the beacon word for me, you know I always think it comes more, you know there is a corporate mentality out there, but there’s also a tremendous amount of self-censorship among the press. It’s like a disease.

But also — they not only — they took away the edge from the press, they also muzzled the bureaucracy, they muzzled the military, they muzzled the Congress, and it’s an amazing feat. We’re supposed to be a democratic society, and all of those areas of our democracy bowed and scraped to this group of neocons who advocated a policy....

...you have a government that basically has been operating since 9/11 very successfully on the principle that if you’re with us you’re a genius, if you’re against us you’re not just somebody [in the] loyal opposition, you’re a traitor.."

What we didn't see:

Some of the worst things that happened that you don’t know about. OK? Videos. There are women there. Some of you may have read that they were passing letters out, communications out to their men. This is at [Abu Ghraib], which is about 30 miles from Baghdad — 30 kilometers, maybe, just 20 miles, I'm not sure whether it's — anyway. The women were passing messages out saying please come and kill me because of what’s happened. And basically what happened is that those women who were arrested with young boys, children, in cases that have been [video] recorded, the boys were sodomized, with the cameras rolling, and the worst above all of them is the soundtrack of the boys shrieking. That your government has, and they’re in total terror it’s going to come out. It’s impossible to say to yourself, how did we get there, who are we, who are these people that sent us there...